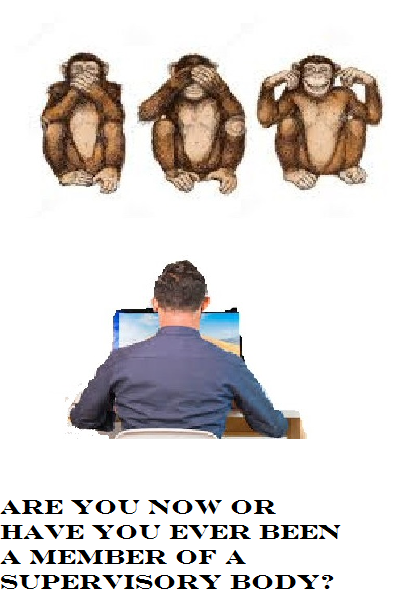 There was a time when the term "supervisory body" was self explanatory:-  a board of management of which non managerial workers are members, having supervisory powers over some aspects of management decision-making. There was a time when there was confidence in the functioning of such bodies and the decisions that emanated from them.  That time has, in my humble opinion, long passed its sell by date. The appeals systems in the criminal courts has failed all too often whether by default or design. Its slow coach approach has led to too many convictions being overturned only after inordinate delay but of course in such cases the general public couldn`t give a hoot.  That was until the whole sorry story of Hillsborough was revealed after three decades of procrastination by all the supervisory bodies involved. The rape scandals in Rochdale and other towns would never have continued as they did if the so called supervisory bodies locally and nationally had done the job their members were paid to do. Since the "Libor" scandal of a decade ago which cost billions of pounds only one person has been convicted; a national disgracing once more of the supervisory bodies involved. Mad cow disease of the late 1980s could have been minimised if not prevented if the  Conservative government at the time (the supervisory body of last resort) had not failed to stop cattle infected with BSE getting into the human food chain and not failed to alert the public to the possible dangers posed by the disease. Currently there are calls for an independent inquiry into previous inquiries on the hundreds of deaths at Gosport Memorial Hospitals over the last twenty years. Financial organisations are still treating their investors with disdain and getting away with it.  Currently in the dock are Hargreaves Lansdown and the funds run by Neil Woodford who has enriched himself by hundreds of thousands of pounds while his investors have been unable to access their shrinking funds.  Where is the oversight?  And only last week a member of the Grenfell  Tower inquiry has been made to resign owing to her association with the company responsible for the cladding. Even at this early stage of that inquiry it is not unlikely that various supervisory bodies will be found to have failed in their duty of care.  Almost weekly there are revelations of failings by the Quality Care Commission with regard to the organisations over which it is charged with supervision and the maintenance of standards. Perhaps nowhere is the failure of supervision more apparent and concerning than in the working of the Independent Office for Police Conduct and its predecessor. There is no national information of the numbers of senior police officers (Chief Inspector and above) and more significantly Chief and Assistant Chief Constables who resign or are dismissed. Indeed the statistics on misconduct generally  are a fairly recent innovation. An atrocious example of what is happening before our eyes with regard to police misconduct is that of former Assistant Chief Constable of Greater Manchester Police. For her gross misconduct she was not fired. She was the topic on this site on 31st January 2017 and retained her position until she resigned  about a year later.  Yet notwithstanding that disgrace she has been appointed to a high profile job again in the public sector at Oldham Council.

It is not just in the highest office in the USA where it seems that there is no high crime or misdemeanour which can be guaranteed to prevent a merry go round of miscreants in high offices of supervision in this country from continuing on their merry money making way.