COURTROOM TELEVISION IS A STEP NEARER 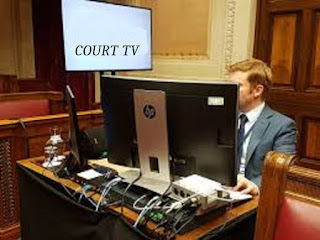 The MOJ, HMCTS and others are making full use of the dozens of public relations weasels frantically typing away on their keyboards in the bowels of Petty France. A section of their latest missive on behalf of HMCTS is copied below.

Media and interested parties continue to be able to attend physical hearings in the ‘open’ courts to uphold the principles of open justice. Where this is not possible, judicial consideration is being given to enable new ways for journalists to join a hearing remotely, or a receive a transcript afterwards. We are continuing to work to develop ways in which we can continue to support media and public access to the work or courts and tribunals.

There have been many unconfirmed reports that despite the thousands of words from MOJ on how information on the workings of the courts, including of course magistrates courts which are not courts of record, can be brought to the public via accredited court reporters and other journalists there is a lack of information to the extent that many hearings are going unreported even in the circumstances when only about half the courts are functioning and there is a limitation on the matters being brought.

For as long as these posts have been published I have stated my unswerving opinion that not only is televising of courts including magistrates courts necessary for justice to be seen to be done it would be a fund raising operation for HMCTS with media groups seeking to broaden their appeal on a localised basis.

The tragedy we are witnessing and the consequent economic catastrophe for individuals and businesses large and small will lead to their necessarily aggressive manoeuvres  to maximise income over the next five years or longer. Courtroom television live in the living room is another step nearer.