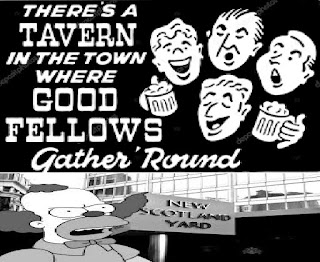 Yesterday I posted the latest available report from the organisation which is responsible for collating reports of police misconduct.  Of course all the leg work is carried out by disciplinary boards of the country`s constabularies.  Somebody with the energy and statistical interest and/or knowledge might comment that what is in the report is far less intriguing than what is omitted. The decisions made at lower levels seem in some cases to be suitable for an old boys club.

Commander Julian Bennett was and still might be the Met`s officer responsible for drug strategy except that he was suspended last month over alleged drug misuse. Apparently he refused to take a drug test after a tip off. He himself has chaired hundreds of of disciplinary hearings . The IOPC has referred the case back to Scotland Yard to investigate.

Another senior officer at Scotland Yard; Chief Superintendent Rob Atkin, has been "reprimanded" for keeping quiet about a close personal relationship with a junior female officer he was mentoring. Not only was he mentoring her; he promoted her. A panel led by an independent chairman found that the main allegation; breaching standards of professional behaviour for authority, respect, courtesy, honesty, confidentiality and integrity had been proved and he was found guilty of misconduct. Now most reasonable folk especially those who work for large organisations would have thought that that would be enough for the offender to be demoted or even given his marching orders but dear reader we are dealing with the Metropolitan Police Service which is almost a law unto itself. His punishment?  He has been reprimanded. The Met said that he had "showed poor judgement rather than displaying deliberate wrongdoing".  If they had patted him on the back and said "There`s a good fellow. Don`t do that again" at least that would have been more honest.

In 2007 when Brazilian Jean Charles de Menezes was sitting in a tube train and shot  seven times the incident commander was Cressida Dick who was absolved by a jury of any personal culpability. Ms Dick of course is now the Commissioner of the Metropolitan Police.