A COURT REPORT IN COVENTRY LIVE BETTER NOT PUBLISHED 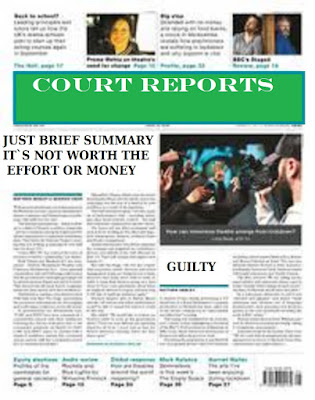 Reporting from magistrates courts is by necessity often sparse.  Indeed the public is fortunate that court reporting is still undertaken at all by local print media. The cost for publishers is often an expense ill afforded.  My last court activity was over five years ago but after seventeen years on the bench it takes sometimes only a moment or two for old memories to be revived.  And that is what happened when I read this short report.  Now admittedly there is no detail on the offender`s circumstances, his previous offending (if any) or any other material that might have been offered to the bench in mitigation.  There is no information whether as is usually the case a probation pre sentence report was presented to the bench. We do not even know if he were represented although a duty solicitor must be engaged for an offender at first appearance if there is the possibility of custody. Whether or not this was the case we just don`t know. All in all this was court reporting at the lowest level worthy of the description. What we do know is that he pleaded guilty which allows 10% to 33% discount in the sentence. We know that notwithstanding all the above he received the maximum sentence possible under the circumstance according to law. Therefore we can assume that there was considered by the bench maximum culpability although no harm was apparently caused to anyone leaving aside any fears if his actions were visible to the public.  I fail to see how all the above being considered why his sentence was suspended. This really is an example where the reporter should have stayed in bed.

I have long championed the idea of local magistrates courts being televised live by perhaps local media entrepreneurs.  At least we, the great British public, would be able to see the legal process in action as it actual happens; not a severely truncated version of events which might be considered worse than no printed report at all.