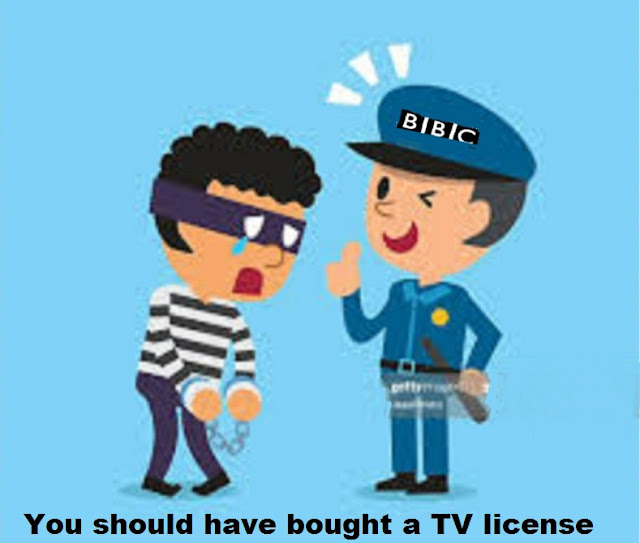 Will they? won`t they? push me, pull me to the top of the hill and push me pull me down again.  These remarks seem to be the underlying propelling thrusts of the government`s policy on BBC TV licensing.  Literally for years Tory governments have been hinting that the bloated BBC cannot be reliant on the funding (read taxes)  provided by every household which receives live television broadcasting. This news was greeted      positively by many outside the family of luvvies who derive enormous proportions of their income and wealth from those who are unable to feed their families even with the support of social security payments. More recently the current occupants of political power have hinted strongly that failure to pay the license fee will be decriminalised; ie such charges would be brought through county court and not the magistrates court where currently around 130K such cases are heard annually which works out at about 15 per week per court. Many if not all these alleged offenders` cases are decided through the single justice procedure.    There are about 26 million TV license payers ie about 0.50% of TV viewers` households have been found guilty of evasion. Along with the vast majority of my former colleagues I was none too happy with the situation. Invariably the poorest and/or recently arrived immigrants seemed to form the bulk of offenders although it was not unusual to discover that a subscription TV service was being paid for when the license was not. Those appearing before us were distressed to discover that that they had committed a criminal offence.  License inquiry agents tended to hold the first person to open the front door of a suspected premises to be the person responsible for the offence.

Most members of the public do not know that they are under no obligation to open the door nor allow entrance to their property to an inquiry agent. I recall a case where that unlucky door opening first person who appeared before me and my colleagues was a visiting American Harvard law graduate who now as a result has a criminal record in the UK.  When my son went to university I advised him not to overlook requiring a license for his flat`s TV and never to open the door to an inquiry agent.

The BBC having spent over a £1,000,000 on outside lawyers notwithstanding their staff lawyers` wages  argued inter alia that decriminalisation would cut their revenues by £300 million annually.  And to indicate their humanity emphasised that were the offence to be decriminalised county courts cannot take offenders` means into consideration when finding for the plaintiff who in this case would be the BBC. In England in 2018  the majority of the few jailed not for neglecting to pay for a license but for wilful neglect or  culpable refusal to pay the resulting fine were women who make up almost 70 per cent of those prosecuted.  Indeed 30% of all criminal prosecutions against women in 2017 were for evasion of the TV licence.

But all that flag flying of the last five years or more has gone with the wind. Ministers have decided not to end the criminal prosecution of evaders and this at a time when the only companionship for many home ensconced children as well as adults is their television with its five basic channels plus those free to air. The recent government statement is available here.

The free marketeers on the extreme right who have championed Brexit and rally against lockdown seem to have lost this one. But so have the government by marching up the hill only to march down again behaving like a simpleton who agrees with the last argument fed to him. So poorer over 75s will still have exemption from the TV tax but not those 65-75 year olds of similar financial status. It is one thing for a government to listen to its citizens but it is another to vacillate over so many of the decisions that must be made. That leads to general calls for decisive action in a myriad of situations.  It is but an early event in the sequence which leads to demands for strong action and inevitably to a strong man to provide leadership to take that strong action.  And we can guess where that leads..........can`t we?