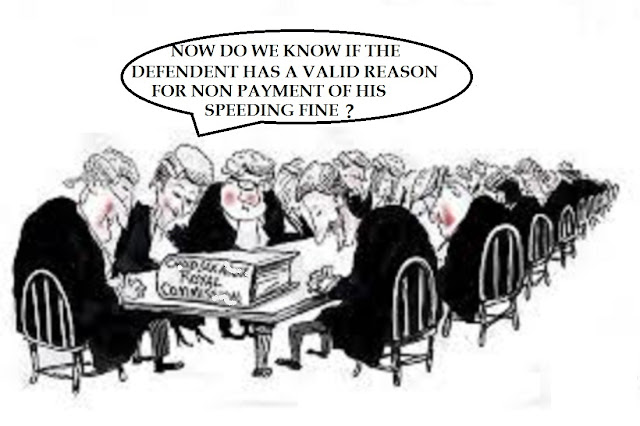 There is no doubt that many previously ignored facets of life in the European Union previously taken for granted are now being compared to life in a supposedly independent UK. Extremists on both sides of the Brexit argument are still raising their voices metaphorically and in real time to offer their opinions many of which are bereft of sensible argument but complete with invective and ever more strident haranguing of the perceived opposition. One aspect central to our collective lives continues to underperform using Covid 19 as a convenient excuse; our criminal justice system. In the week ending 20 September 2020, there were 509,347 cases outstanding in the magistrates' courts   and  at the end of Q3 2020 there were 50,918 outstanding cases at the Crown Court, an increase of 44% on Q3 2019 (35,478 cases). This is the highest level of outstanding cases seen since the end of 2015 and continues the consistent increases seen since Q1 2019.  I have yet to read anywhere of any significant member of the legal profession daring to suggest that judicial systems in continental Europe might offer increased efficiency compared to the concept of common law underlying English law. Perhaps there really is a belief that English is best;  I don`t know but what I do know after watching again many series of the wonderful French series "Spiral" is that the case for magistrates in England taking on a more inquisitorial role is in my humble opinion one that cannot be merely dismissed as unEnglish.

In France and other jurisdictions where the justice system is inquisitorial as opposed to the adversarial system in the U.K. there is an office of investigating magistrate. And as it says on the tin that person takes an active role in the investigation and court proceedings. Judges and J.P.s take an impartial role in the presentation of a criminal case and its defence. There are, however, occasions in a magistrates` court where intervention is not just allowed but necessary in the interests of justice. Frequent examples which come to mind are where a witness is being badgered by a lawyer prosecuting or defending or where the lawyer is insensitive to a witness`s ability to comprehend a convoluted question whether that lawyer`s insensitivity is by accident or design. The cause for intervention in such cases is relatively simple to make. But matters are never always so straight forward.

I can recollect a case some years ago when I was sitting on one such prosecution. The prosecutor in her opening told us that her only witness, the investigating official, would read his five page statement and she would be relying on a bundle of over 200 pages as her evidence. We duly heard the official and a brief glance at the bundle showed that in addition to the official`s statement it was divided into three complainants` statements, the defendant’s interview, documents directly connecting the offender with the alleged offences and his various bank accounts over the specified period. Defence council had little upon which he could defend his client during cross examination of the official. His client who was not the sharpest knife in the drawer duly did his best under cross examination which was not approaching a Perry Mason standard. We retired to read the bundle telling those involved that we might have some questions for the defendant.

Much of the material in the bundle was totally unhelpful and unnecessary. We had to hunt for the pearls that the prosecutor had told us would be the basis for her case. We duly did find documents which appeared to link the defendant with the offence. Our concern was that they although they had been exhibited neither lawyer had pin pointed them. We decided that in the interests of justice we could not adjudicate without further knowledge and more answers. Thus we questioned the defendant in detail overruling objections from his counsel. He was found guilty. At the post court review our legal adviser anticipating the tone of the discussion assured us that our inquisitorial approach was, in this particular case, perfectly lawful. He agreed that the prosecutor was failing in her duty when she attempted to rely on a huge bundle without further probing. He added that he would have intervened if we had been overstepping the mark.

With ever increasing numbers of defendants denied legal aid and without the means to employ representation it is my belief that magistrates and District Judges must be allowed discretion to undertake an inquisitorial  role to ensure that a defendant is assured of justice not being denied owing to their  inability or lack of confidence in presenting their opinion in the witness box.  There will be many who will vociferously protest that the level playing field and equality of arms argument must not be questioned but those very terms are now nothing but fond memories. Indeed they are a misrepresentation of the current state of activity in the magistrates courts system. They are an anachronism. Even before my last court sitting almost six years ago it was apparent that many defendants were considering guilty pleas simply because of convenience in getting the matter over with. Pressures for such equivocal pleas have increased greatly since then although I know of no research to prove my point. A most enlightening article on the consideration of early guilty pleas and ancillary information The Supervision of Guilty Pleas by the Court of Appeal of England and Wales – Workable Relationships and Tragic Choices is available here.

Chairmanship of a magistrates` bench is an art not a science although the drafters of the so called competences required and the resultant appraisals techniques would seem to argue otherwise. J.P.s` awareness of when sensitive questioning of a witness is useful is not in the instruction manual but it is in the interests of justice especially in this era of unrepresented defendants.  The adversarial system can only offer confidence in the concept of justice for all being done and being seen to be done when there is a true equality of arms.  When boxing enthusiasts attend a fight they do not expect a flyweight to be matched with a middleweight.  In the magistrates court where the stakes are sometimes life changing such mismatches are an every day occurrence.  There must be change.