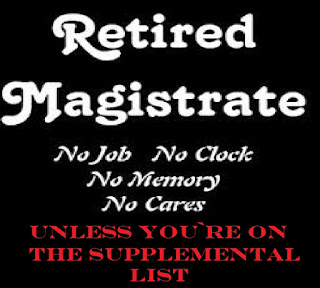 I sat on an inner city bench for seventeen years until enforced retirement allowed me to retain use of the J.P. suffix and automatically relegated me to the "supplemental list" where a very few magisterial functions were still within my authority. The most significant of those  is the authority to countersign  passport applications as  countersignatories must either work in (*or be retired from) a recognised profession and Justice of the Peace is a recognised profession. Those on the supplemental list or retired magistrates cannot:-

Sit in a magistrates’ court to adjudicate on cases

Attend any formal or business meeting of their former bench

Countersign an application for a shotgun or firearms licence

There is, however, a price to be paid for those who wish to retain the kudos of having those two letters after their name; namely the holder will still be subject to the rules and guidelines to which serving magistrates are subject. Mr Karl McCartney JP MP was first elected at the 2010 general election and represented the constituency until he was defeated by Labour's Karen Lee at the 2017 general election. He was re-elected as a Tory in the 2019 general election and is on the supplemental list. He also exhibits attitudes of an arrogant right wing Tory. In January 2021 the Judicial Conduct Investigations Office issued a formal warning to McCartney for referring to his role as a Magistrate in election material despite having been reprimanded for this previously. This reprimand was "for allowing his judicial status to be referred to on a political leaflet in a way that gave the appearance of seeking to gain advantage which is contrary to guidance that is intended to protect judicial independence and impartiality." In reaching their decision, the JCIO noted that McCartney had previously received a disciplinary sanction for similar behaviour and was unwilling to acknowledge the inappropriateness of his actions. [my bold]
On 29th October 2020 a spokesperson from the Judicial Conduct Investigations Office said:“The  Lord  Chancellor  and  Mrs  Justice  Cheema-Grubb  DBE,  on  behalf  of  the  Lord Chief  Justice,  have  issued  Dr  Nigel  Molden  JP,  a  magistrate  on  the  Supplemental List,[my bold]  with a formal warning following a careless driving conviction and the accrual of six  penalty  points  on  his  driving  licence.  In  considering  this  matter,  the  Lord Chancellor  and  Lord  Chief  Justice noted  his  continuing  denial of  any  wrong  doing and also took into account Dr Molden’s timely disclosure to his Bench Chair, and his otherwise clean driving and disciplinary records."
These are but two recent examples of retired magistrates falling foul of the almighty JCIO.  Considering that many thousand magistrates will retire in the next decade they ought to think carefully at that point when they receive a letter such as the one I received copied below. No request was made by me to join the list.

What that letter and enclosure did not spell out was an option to opt out of joining the supplemental list and the fact that being on it placed upon the retired magistrate exactly the same obligations and guidelines as existed when active on the bench. .  Perhaps my advice to magistrates about to retire is that if you do not want your personal activities to come under the long reach of the JCIO you must ask to be removed.   As for me; I did not give a thought to the supplemental list and its obligations until as a result of a blog post 23/7/2019 I was threatened with a full on investigation. 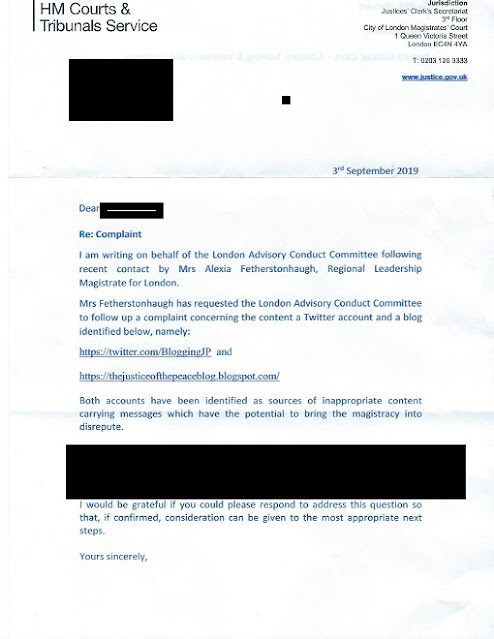 *
I decided that rather than months of arguing and stress to retain those two letters JP and my right to freedom of expression  I resigned from the supplemental list thus ending the inquiry.  But going back to the second sentence of this post I am still a retired magistrate and I suppose that my signature to sign a passport application on that basis will not lead to a death by a thousand cuts from the London Advisory Conduct Committee or its standard bearer Mrs Featherstonhaugh.