MUSINGS ON TUESDAY (MICRO OR MACRO?) 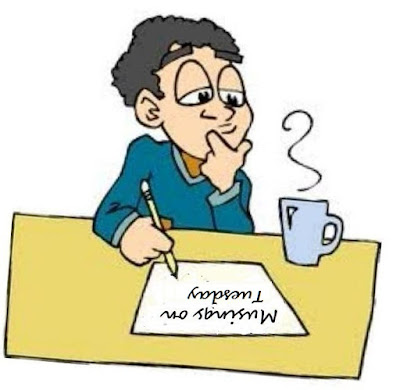 In most observations there is the micro view and the macro view.  Either viewpoint can be illustrative of an opinion. Following are recent examples of the micro view of what purports to be our justice system in its totality.

Unlike other European countries the United Kingdom has no statute of limitations for any criminal offence except for summary offences (offences tried in the magistrates' court). In these cases criminal proceedings must be brought within 6 months.

Last week a 74 year old male was jailed after being convicted of multiple charges of sexual abuse against a 14 year old boy between 1976 and 1979. There is no doubt that the victim`s trauma had a lifelong effect. We have no knowledge of the offender`s history; the report of what was a very unusual case is, unfortunately, truncated to say the least except that we know there was no need for a trial as he pleaded guilty.  Understandably the victim`s name is withheld but it might have been useful if the judge`s remarks including presumably the offender`s previous convictions, if any, had been reported. It is my belief that it is becoming essential if the term open justice has any meaning at all that the live televising of courts must be a priority if our society is to continue to be thought of as free and open.

In complete contrast to the preceding tale it was in 1973 and the following year that 24 trade unionists were arrested five months after a strike and charged with over 200 offences including unlawful assembly, intimidation and affray. Six pickets were also charged with conspiracy to intimidate.  Last month they were exonerated by the Appeal Court.  This is the link in the press report to the judgement.

Can any reader imagine doing a part time unpaid job for 50 years and rising to that occupation`s most senior position?  As a special constable Michael Rogers did just that at West Midlands Constabulary. To him I doff my virtual hat for his service.

Since this post is about numbers I must conclude with a recent announcement from the City of London Police.  It is the smallest force in the country policing the square mile where the resident population is less than 9,000. It comprises a total workforce of 1,207 including 756 full-time police officers and 451 support staff. Recently it announced that it intended to recruit 40% BAME officers. The current ethnicity breakdown is as below. 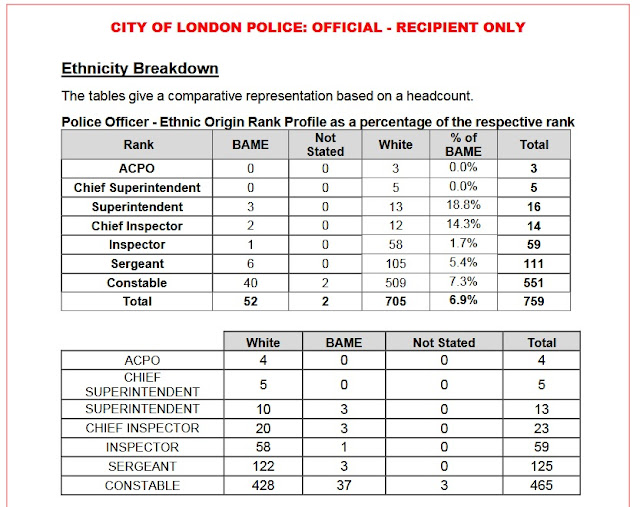 When observations are made about the numbers of non white people in any occupation or situation and political capital is made from such declarations voices are heard that there is a racist undertone when BAME people appear to be over or under represented depending on the particular situation or circumstances but when pushed there are inevitably denials of quota systems in selection. According to 2011 census in the City of London there are resident 57.5% White British; 2.4% White Irish; 18.6% Other White; 0.5% White & Black Caribbean; 0.5% White & Black African; 1.5%.  I leave it to readers to ponder the position and ask the inevitable questions.  I would think the answers might pose as many queries as the questions.