WOKE IS A PERVERSION OF TRUTH 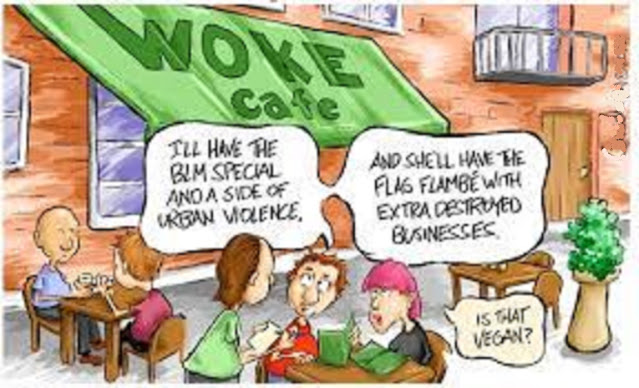 With almost every passing day there is an incident, comment, statement, rebuttal, accusation, or response to any of the previous that includes the word woke. Being a retired magistrate with opinions of a dinosaur [according to some] it took me a while to really appreciate the implications of such a term.  So that we`re metaphorically on the same page I list below some definitions of that word kindly provided by Messrs Google Inc.

“aware of and actively attentive to important facts and issues (especially issues of racial and social justice)”, but today we are more likely to see it being used as a stick with which to beat people who aspire to such values"

"a slang term that is easing into the mainstream from some varieties of a dialect called African American Vernacular English (sometimes called AAVE). In AAVE, awake is often rendered as woke, as in, “I was sleeping, but now I'm woke.” 'Woke' is increasingly used as a byword for social awareness."

"a term that refers to awareness of issues that concern social justice and racial justice. It is sometimes used in the African-American Vernacular English expression stay woke."

Dinosaurs are generally not woke. eg to call a spade a spade is a phrase long used without fear or favour.  It has a long history.  It entered the English language when Nicholas Udall translated Erasmus in 1542. Famous authors who have used it in their works include Charles Dickens and W. Somerset Maugham among others.  In the current climate if used in public or especially  on the bench the speaker is liable to be rebuked as racist or at the very least as careless with language that could be interpreted as such. This is a result of woke.  Similar epithets are often thrown at those who in any way offer opposition to the concept of diversity or inclusive . When I suggested some months ago on Twitter that at age 18 an individual is too young to be a magistrate with all the responsibility that position holds I was greeted with a torrent of criticism some polite but most abusive much of it from lawyers. When on another occasion I suggested that restrictions on jury service be tightened to ensure eg that the individual had capable knowledge of English or a basic understanding of arithmetic etc again it was members of the legal profession who tweeted loudest against the idea. I wasn`t too happy when the then Lord Chancellor ruled that blindness should not be a barrier to sitting as a magistrate. The usual comments were made of diversity and representation and aids to be available to overcome the obvious shortcomings. As far as I am aware deaf people cannot be magistrates although I am sure that many are actively trying to change that position.  What is about to change is the exclusion for deaf people from jury duty. On March 9th the Ministry of Justice released the following:- "Deaf people requiring the use of a sign language interpreter will be allowed to take part in jury service for the first time, Ministers announced today (9 March 2021)."  The full statement is available here.

The basis for this decision is that nobody should be excluded from participation in public life because of disability. It goes back to the woke mantra of equality of outcome by which at the end of the day all are equal. The concept of equal opportunity for all so that each might attain the highest level possible by his or her own abilities is now historical fascism according to a generation led to believe that equality is as near to nirvana that we mere mortals can reach.  These are the same concepts that brought an avowed marxist antisemite close to the door of 10 Downing Street in 2019. Nobody would accept that people of diminished height should be able to work as surgeons or police officers or firefighters although many such handicapped individuals are at the top of their chosen fields where their stature is of no consequence. Similarly profound deafness is no longer a block against such people reaching the top of most professions or activities.  Nobody with any sense would argue otherwise except perhaps at the MOJ the most woke of all government departments. Deaf jurors, even those skilled at lip reading, would be unable to have conveyed by a signing interpreter, the nuances of speech in a courtroom where witnesses are in a foreign and perhaps hostile environment; where some might be attempting to lie or evade; where emotions are subtle and where total reliance is upon the interpreter. The history of court interpretation of spoken language is pitted with queries which astute magistrates and judges can evaluate. Indeed I had many instances in my 17 years to interrupt interpreters  who plainly were not doing their job to the expected standard.  No such long stop will be available for a signing interpreter who is wandering from the accuracy required. And of course in a case where the signer is him/herself translating from a foreign language interpretation problems will multiply and considering the number of interpreting occasions involving non English speaking defendants and witnesses that number will be in the tens of thousands.

Unfortunately no opposition is likely to be heard from the legal profession.  They are so scared of being accused of being against the whole concept of wokeness that with no logic whatsoever they will push on the one hand for the abolition of the lay magistrates bench of three  in preference for a single District Judge but scream at the very thought that availability for jury service is anything less than a universal human right and its denial a throwback to white supremacy however removed the ties are or were.

There is a profound difference in requiring buses, trains, taxis, public places, universities, professions etc to be accessible to blind, deaf and physically handicapped individuals where their handicap is not a burden for an equitable society.  However, to sit in judgement making life changing decisions by those deprived of their hearing is a step too far.  But it is in line with a period of perverted thinking through which the troubled Americanisation of our society is passing; their history of revolution and slavery which is filtering so much of what should be a second age of enlightenment.  In essence woke is a perversion of truth.