RESEARCHERS MUST BE ALLOWED INTO THE JURY ROOM 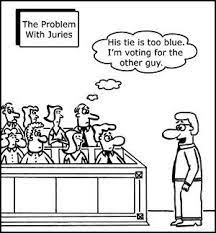 A major "problem" with any justice system is that apart from those who are involved with its functioning and therefore derive their ability to put bread on their family`s table from its continuance, is that the majority of the public who are uninvolved in serious law breaking whether as witness or defendant rarely express any interest in the subject.   Their knowledge of the legal system and its many ramifications in a democratic society are derived from the various media available which now means the sometimes rabid utterings in Twitter or Facebook and the like.  Indeed that is one reason why I have written here not a few times bewailing the lack of old fashioned local newspaper court reporting and the corollary of my wish to see local live TV court reporting. However to return to the reality of today; what some would say is the bedrock of our justice system, the jury, is under severe criticism from both ends of the legal spectrum; judges and victims or their families.  On 27th April I referred to the situation in Northern Ireland where the then current practice as in Great Britain "a jury of one`s peers" could not cope with the incendiary civil disturbances of the Troubles. The problems in England and Wales caused by the current pandemic exacerbated by a decade`s under spending imposed on the Ministry of Justice by successive Tory administrations have led some senior judiciary to contemplate the suspension of jury trials.  Not all lawyers are opposed to the idea or at least are open to a detailed investigation into the possibility of changes to the hallowed jury of 12.   Wikipedia offers a fairly comprehensive but not total understanding of the jury system. The Criminal Justice Act 1967 allowed for the acceptance of majority verdicts. I think it is fair to say that investigations and inquiries into the jury system have been more theoretical and statistical than practical.  No outside observers are allowed into the jury room and jurors are not allowed to comment subsequent to their trial involvement. It would seem that the prime requirement for a juror would be an ability to understand the English language and not just every day language but the more defined language of the legal system and its operatives.  A well recognised authority on this topic and its findings is available here with an emphasis on English language proficiency of those who have immigrated here. It would not seem unreasonable that there should be a check on language ability as a requirement for jury service. It would also seem sensible that a person`s ability to be able to reason and differentiate credibility of evidence of witnesses as essential to wade through the statements given in the witness box where there is always the possibility  of deliberate lying or distortion of the truth.  Finally in this very short opinion piece I would opine that it is inappropriate that a person who is not a British citizen can be selected for jury duty. Surely when we talk of a jury of peers a fellow citizen fits that requirement and a non citizen does not.

All the above is theory, opinion and history.  The nefarious results of some jury trials are essential reading for most criminal lawyers.  Indeed such an event was the subject of my post 27th April referred to above. However an example of the more serious consequences of a possibility of a jury gone wrong was reported in some detail in long reads today. Of course we will never know why the jury acquitted; speculation is all we have.  However there is one speculation that has probably more credibility than any other: if the case had been heard in Scotland there would have been the possibility of the third verdict, unique in the western world, not proven. There are those south of the border who would be aghast at the very thought of such a decision being available to English juries their argument being that the innocent could be tarred with guilt and the guilty would forever be unable to claim their innocence. Given the case aforementioned above it doesn`t seem unreasonable to state that the true verdict was indeed that the level of proof required for a guilty verdict was lacking and that non proven is a more accurate understanding of what happened in the privacy and secrecy of the jury room.  We will never know. And that is the crux.  The conduct of juries being treated as sacrosanct is no longer tenable.  Selected academic studies must be initiated into this so called bastion of English justice if judge only trials in England are to be a non starter until revolution hits the streets of Westminster.