11 YEARS ON AND NOTHING MUCH HAS CHANGED 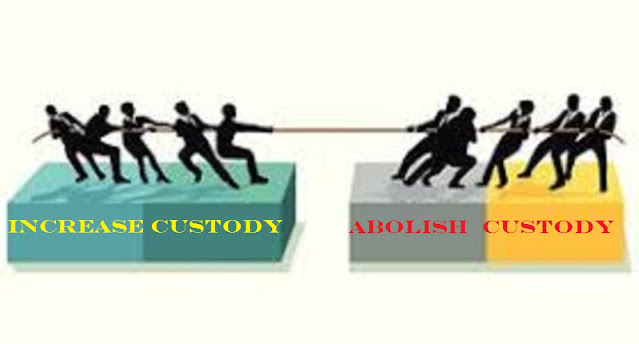 The Law Gazette`s comments page on extending the sentencing powers of magistrates courts has as expected produced the same old arguments that one reads almost annually when this proposal gets a public airing. The usual  people respond that the best way to serve justice is to remove entirely the powers of magistrates courts to use custody as a sentencing option. Earlier this week The Guardian had published this.  A new Lord Chancellor has already in his short time in office come out with the usual platitudes.  No doubt there will be more to come.   A looming financial crisis is once again going to be an excuse for delaying the much needed finance to reduce the abysmally long delays especially in the crown courts. All this hoo ha reminded me of a post I wrote almost exactly 11 years ago on 20th October 2010. I think it might jog a few memories and even be instructive if I copy it below in full.

QUESTIONS IN THE HOUSE/SHORT SENTENCES

A question and answer session yesterday with Justice Secretary Kenneth Clarke on short sentences at Magistrates` Courts is worth copying here below.

What recent discussions he has had with the Sentencing Guidelines Council on its guidance on short custodial sentences.

The Sentencing Guidelines Council has not issued any specific guidance on short custodial sentences. We have had no discussions with the council on this topic, which we are considering as part of our assessment of sentencing policy.

The Secretary of State may be aware of a recent case in my constituency in which a young man suffering from autism and Asperger's syndrome was subjected to a series of horrific attacks by three other young men. The judge said that the attacks could almost amount to torture, yet the three perpetrators were given community orders. During the general election, Mr Cameron, now the Prime Minister, told the country that we are not convicting enough. He then explicitly said that

"when we do convict them, they're not getting long enough sentences."

Just two weeks ago, in his speech to the Conservative party conference, the Prime Minister said that

I agree with the Prime Minister-does the Secretary of State?

One of the failings of the last Government was to take a popular subject from the popular press and make rather shallow partisan points out of it. Sentencing in individual cases is not a matter for Ministers, and should not be a matter for sensational comment to the newspapers by Ministers with the frequency that it was. We have to ensure that justice is done, particularly to the victims of crime, and that justice is carried out in such a way as to reduce the risk of reoffending. We have made our approach to crime perfectly clear: we must punish the guilty. Prison is the right place for serious criminals-they will not commit more crimes while inside-but we also strive to avoid reoffending. The case that the right hon. Lady mentions was obviously a serious case for the victim, but newspaper cuttings from Salford are not the source of future criminal justice reform.

Will the Secretary of State take this opportunity to acknowledge that very few people are sentenced to prison for a first offence? The vast majority of people who serve short-term prison sentences do so only because they have been given community sentence after community sentence, all of which have failed. The last thing to do with those people is to give them another community sentence, only for it to fail once again.

It is very pleasant to say that I largely agree with my hon. Friend. He has probably been upset by reports that I am minded to abolish short prison sentences. Actually, I have always expressed precisely the opposite opinion. It has never been my view that we should abolish all short prison sentences. Indeed, I have rather shared his opinion that with the kind of irritating recidivist offender who is causing a lot of damage, if they offend over and over again there is quite often no alternative to a short prison sentence. There are too many such offenders, and although there are cases in which we can avoid the use of short prison sentences, if we do that we must have a very effective alternative.

May I begin by saying how much I genuinely relish the prospect of debating-and, dare I say, arguing-with the Lord Chancellor and his team on the matters in their portfolio? I am also looking forward to working with the coalition Government where there are areas of agreement between us, notably on the use of restorative justice projects such as community payback-a subject that has already been raised by Elizabeth Truss and other colleagues. However, the right hon. and learned Gentleman will know that most people who receive short prison sentences are persistent offenders who have refused to change their behaviour, even after undergoing community sentences, as has been said. He has said that he is not against abolishing the power of magistrates to award short sentences. Will he commit today not to reduce, in the sentencing review now taking place, the power of magistrates to give custodial sentences where appropriate?

I welcome the right hon. Gentleman to his place, and I look forward to debating with him. He has certainly got to Cabinet level a damn sight more quickly than I ever did, so I am sure that he will prove a formidable challenge to the Government. As I have already said, we will not take away powers from magistrates courts, which sometimes find it absolutely inevitable that they have to give somebody a short prison sentence, because everything else has failed and that person is continuing to cause damage to other people. However, we hope to provide magistrates with the full range of alternatives. As my right hon. Friend the Minister for Policing and Criminal Justice said a few moments ago, more credible community sentences-sentences with a properly punitive element that might have a better chance of rehabilitating the offender-should be tried in more cases, and we will try to provide them for magistrates.

I am grateful to the Lord Chancellor for that answer. He has made it absolutely clear that magistrates will not have the power to give short sentences taken away from them. For clarity, will he also confirm that the cuts that will be announced tomorrow will not lead to a reduction in any prison places or to any prisons being closed?

I hope that the right hon. Gentleman is not going to follow his predecessors in making a great policy point about a target for the number of people in prison, because there is no evidence that that does any good to anybody. We do have to- [ Interruption. ] The present numbers are enormous compared with the numbers when we were last in office. There are 20,000 more people in prison than there were when we last had a Conservative Home Secretary in charge. We are looking at what works, and what protects the public. Prison must be used for those for whom it is essential, but it is simply not the case that prison is the only way of dealing with all offenders. Once we have punished people and given others a break from their activities, the key thing is to do more than the present system does to reduce the risk of their reoffending and committing more crimes against more victims, to which the present system almost condemns us. More than half of prisoners-

Order. I am grateful to the Secretary of State, but we now need shorter questions and shorter answers.