STATISTICS AND A SOCIETY UNDER STRESS 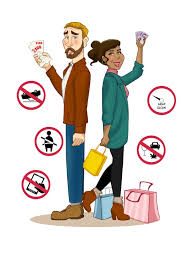 The Ministry of Justice has much for which criticism is appropriate but one area where that criticism is rightly muted is in the collection of statistics. Apart from information on the numbers and outcomes of appeals at crown court against decisions at magistrates courts which have in the past been made available through Freedom of Information, almost everything that results from a court appearance is available by way of charts and numbers to satisfy the most fastidious statistician amateur or professional.  Being neither of those it is still possible as a mere observer  to find some interest. The year ended June 2021 is the latest in such releases. The section chart below is quite interesting. 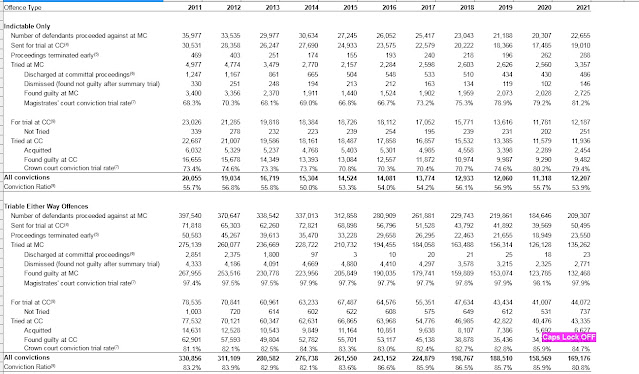 In my experience many if not most lawyers advise clients facing an either way charge to elect trial at the crown court.  Of course not every defendant can afford the fees involved and many others just want to get the process over and done with as quickly as possible but nevertheless it is instructive to compare the conviction rates in these matters. In magistrates courts that rate was 97.4% in 2011 and remained virtually unchanged at 97.9% in 2021. By contrast the comparable rates at crown court over that period were 81.1% and 84.7%. Even as a non statistician I can note that from the defendants` point of view the motto must be "elect trial by jury". The unasked question of course is why does this discrepancy exist.  Some observers assert that magistrates become case hardened; others that magistrates are more likely to be able to detect liars.  It could be that a bench follows a structured decision making process to come to its conclusion but a jury of peers can involve a whole gamut of human emotions in coming to its decision.  However with around 300 District Judges (MC) and Deputies sitting over an unknown number of such trials the picture becomes somewhat clouded.

For summary motoring offences the statistics indicate that in all probability and with few exceptions defendants would be advised to plead guilty and make use of the reduced sentencing such early pleas offer.  In 2011 the conviction rate was 98.5% and in the year ended June 2021 98.8%.  In other words whether the CPS evidence is from camera or police officer it`s unlikely to be successfully contested. It would also appear that the Single Justice Procedure introduced in 2015 has not influenced the conviction rate.

A disturbing fact is that indictable offences of violence against the person proceeded against at magistrates courts have increased from 42,530 to 52,925 (+24.44%)between 2020 and 2021 a period in which there was social lockdown. Perhaps future social historians will have something to say about our society under stress.