1984 AND THE EQUALITY TREATMENT BENCHBOOK 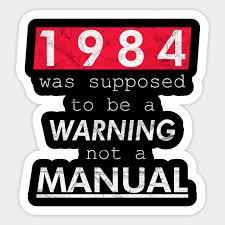 In the days of empire, and laterally when newspaper editors focusing on the pampered lives of the great and the good who were whiling away their fortunes on sun, sea and sex in the Caribbean, it was known as the silly season and to the rest of us as August.  In the days when the assizes were in session reports from these courts probably reached more of the population in that month than the rest of the year. Some judges became celebrities from their pithy comments; e.g.  ‘In England, justice is open to all, like the Ritz hotel.’ Not so much a joke as a cynical quote from an English judge, Sir James Mathew (1830-1908). Obviously he felt that justice was a luxury for the rich!  Judges being considered out of touch with the common man was a very accurate observation.  Those were the days. When so many receive their information rated as newsworthy by their social media source the silly season is now of twelve months duration. The ever present social pendulum within and without the Ministry of Justice has swung its full arc.  Nowadays it`s impossible to read about a court case without the term victim being bandied about even before a case has been concluded when the correct description of the party supposedly done harm is complainant.  The idea that everyone is equal before the law has become but a historical reference in many matters revolving around women and their perceived harm when the only weapon involved is words that supposedly cause offence. Judges are appointed to function within the laws laid down by parliament. But that is not written on tablets of stone.  Many a durable dictatorship whether of the Left or Right has emerged from legislation which serves only to increase the power of those who enabled its propagation. In such circumstances some judiciary have resigned, some have been "removed" and some have remained to endorse and put into practice such activities that serve their paymasters. They are the most dangerous to any concept of justice. Often such legislative changes are enveloped in the mist of driving a social agenda. We are in such a mist currently that a lack of vision seems a pre requisite for those who are enablers of a process to drive common sense from political thinking as if it were a scourge on the face of society.  For some years all judicial office holders from the humblest magistrate to the most senior Supreme Court Judge have been directed to function within the prescribed direction of the recently revised "equal treatment bench book"; a hefty document currently of  538 pages.  It is impossible to read without thinking even for a moment that some legally minded geek, anorak or nerd (take your choice) has been let loose with a computer and the definition of "woke". Amongst many other instructions to judges is that they must refer to defendants and witnesses by the gender that they (defendants and witnesses) have chosen for themselves. In real world practice that means that  a defendant tried for rape with a penis must be referred to as a woman if that is the self chosen gender of that defendant. Truly we are living in a world devoid of reality. Perhaps the section on so called "Islamophobia" is the most revealing insofar as the history of Islamism is considered pp273. It would seem that the authors of the Revision have little or no knowledge of the Muslim Brotherhood.   "Islamophobia” was invented by the Muslim Brotherhood to mimic antisemitism. In doing so it is in itself a feature of Jew hate and allows any criticism to be labelled as a social disorder.  It features also with reference to criticism of those Muslims advocating jihad against the State of Israel.


Shedding daylight on the absorption of the judicial system into the world of woke is not to lambaste the MOJ; no sector of our so called country and its institutions is immune. The government of Wales has outlawed inter alia the use of the word "Brexit" to be substituted by " transition period to refer to the time between February 1st and December 31st 2020".    In accord with the revisions above it has also decreed that "non disabled" be used rather than "able-bodied".  In a short search only a Welsh language version of these new instructions is available although unless the Welsh staff of the Daily Mail and other news media are working over hard an English language source must be out there somewhere.

The use of language to reflect or instil changes in a society has long been a tool of authoritarian regimes.  Perhaps George Orwell was and is  the most well known observer to warn us of this least noticeable influence in the removal of individual freedoms. 1949 for most of Britain was the year of the benefit of a newly established National Health Service.  It was the year when clothes rationing ended, NATO was established, when the Chinese communists took power in mainland China and the USSR exploded its first atom bomb. For me the novel 1984 has proved the darkest warning of our future.
Happy  New Year 2022