The End of Free Speech? 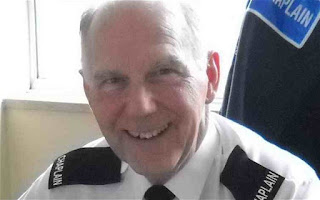 You may have read the story that a police chaplain, Reverend Brian Ross, has had to leave his post. He made comments on his blog stating that he was against gay marriage. This is why police bloggers are anonymous. In the politically correct infested world of the police and public sector, having opinions that contradict the Orwellian equality policies means state persecution and dismissal.

Regular readers will know how I hate our current state of Liberalism. This notion that is is bringing about more freedoms and less state control is ludicrous. Liberalism has brought about a society where no one has any responsibility for themselves. Self control and accountability has almost disappeared resulting in erosion of freedoms . Most concerning though is the erosion of freedom of speech.

We now have three political parties who are almost indiscernible. Nu Labour moved the Labour party firmly to the centre, waving goodbye to the loony left. Blair and Brown spent us into massive debts to try and buy votes from their grass roots. Truth is the Labour elite actually hate their supporters as we found when Brown was caught labelling Gillian Duffy as a bigot. Cameron has jumped on the same bandwagon. He believes that to become electable he has to move the Conservative Party to the centre and he despises the traditional Conservative vote. The problem for Cameron is that the intolerant centrists hate him. He is despised as a privately educated toff and will never be accepted by the liberal classes.

This takes me back to the story of Reverend Brian Ross. Our liberal society has become so intolerant that anyone whose views differ from theirs are abused and treated as sub human. Pink News actually did a very balanced story regarding Reverend Ross. But if you look at the comments it is a different matter. 'Good riddance.' 'Bigot.' 'Bollocks.'

I don't agree with gay marriage. I don't believe the Government has the right to change the Oxford English Dictionary definition. I have no religious shackles and I believe that the churches opinions on the matter are largely unhelpful. I believe that a marriage is between a man and a woman with the ambition of producing children. I don't have a problem with gays or gay relationships. I support civil partnerships. I am of the view that as gay relationships cannot produce children without the involvement of a third party then they are different and cannot be a marriage. I don't care if gay couples relationships are blessed in church or anywhere else. I don't care what their relationship is called but it is not a marriage. There are good reasons why that difference should be maintained.

Some people will say that my views make me a homophobic bigot. I am genuinely bewildered by this. The sad thing is that if I publicly stated those views as a serving police officer I would likely be sacked.

This is a very dangerous path. To me it seems no different to Nazi Germany. We all know the old story where they came for the Communists and the Jews first, and everyone else did nothing because they were neither of these things. Then there was nobody left to protest.

Liberalism, rather than creating a country of understanding and respect has created a country of blandness and intolerance. Characters with opinions outside of liberal tolerances are eradicated from the public sector and vilified elsewhere. The police are questioning people for opinions that allegedly cause others alarm or distress. People have been prosecuted for their 'non conformist' opinions. The situation is getting worse all the time. How long will it be before people are sent to re-education camps, imprisoned, tortured or executed for their non liberal views?