How The Courts Protect Officers 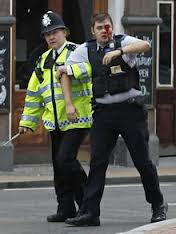 There are a number of blogs out there highlighting the failure of the justice system to punish criminals and I won't make a habit of joining them. This case though just highlights how our justice system fails to protect anyone including those charged with upholding the law.

Two police officers intervened when five thugs were threatening a doorman. The thugs turned on the police and assaulted them both causing significant injuries. Three of the five were convicted of affray and one of assault after a week long trial.

This is what the sentencing guidelines have to say regarding the offence of affray.

'Custody is the starting point in their sentencing decision but there is power to reduce the sentence by up to 1/3 for an early guilty plea, which may mean that custody can be avoided by the offender co-operating at the earliest stages. As an alternative to custody, the sentence may be a community punishment e.g. community service, which is served in the community.'
These three didn't plead guilty and because the attack was on police officers there were aggravating factors that should have meant an immediate prison sentence.

Many years ago I was sucker punched in the cells by an offender. I had a black eye and four stitches in my eyebrow as a result. The offender pleaded guilty to ABH and was sentenced to 3 months imprisonment suspended for two years. A year later he was charged and convicted with ABH. He was fined Â£150 for that assault and the suspended sentence was not invoked.

Our justice system is so focused on reducing the prison population in order to save money it is of no deterrent effect at all. It is rewarding offenders and failing to protect the vast majority who uphold and obey the law.

The Vice Tightens Posted on 15th November 2013
Another bit of kit Posted on 29th July 2012
Told You So (And So Did Everyone Else) Posted on 05th April 2016
Virtual courts cost more than they save - Telegraph Posted on 22nd December 2010
No Surprise There, Then Posted on 28th November 2013
New powers help police protect victims of domestic violence in Hampshire and the Isle of Wight Posted on 23rd June 2014
LORD THOMAS SPEAKS OUT Posted on 02nd October 2015
GOING, GOING GONE Posted on 27th July 2013
The Shootings and the BBC (2) Posted on 26th January 2013
MAGISTRATES` COURTS DISPOSED OF SINCE 2010 Posted on 03rd October 2017