A career thug was shipped back to Britain from Australia, so why can't we do the same thing?

On the other side of the world, a migrant convicted of the attempted murder of a police officer is deported, on the grounds he poses an â€˜unacceptable riskâ€™ to the native population.

Few would describe the Australian governmentâ€™s decision as anything other than common sense.

After all Clifford Tucker, a British citizen, had abused Australiaâ€™s hospitality. By throwing him out, justice was undeniably done.

Consider, however, what would have happened if Tucker â€“ a career criminal jailed for 12 years for shooting and seriously wounding a police officer â€“ had been a foreigner committing crimes in Britain.

There is precisely zero chance that our courts â€“ or the interfering judges in Strasbourg â€“ would have agreed to his removal in the interests of protecting the British public.

Instead, they would have found that, because he moved here from his home country when he was young, Tucker had a â€˜human rightâ€™ to a family life in his adopted nation. Since he had three children his hand would have been strengthened even further.

Depressingly, these are the rules we live by thanks to the European Convention on Human Rights and Labourâ€™s Human Rights Act.

No matter whether a person is living here illegally, or what heinous crimes they commit, if they can evade the authorities for long enough, our courts will let them stay for ever. Housing, benefits and every other right enjoyed by law-abiding British citizens will inevitably follow.

In other words, compared to Australia, America and dozens of other countries, British justice is a soft touch.

Witness how, in a case with chilling similarities to that of Tucker, Learco Chindamo was permitted to remain in Britain despite killing London headmaster Philip Lawrence.

Instead of Chindamo being sent home to Italy once his sentence was served, an immigration tribunal ruled â€“ to widespread horror â€“ that because he had been here since he was a small child, he had a human right to remain here. The fact he posed a danger to the public was seemingly irrelevant.

Or consider the case of Aso Mohammed Ibrahim who knocked down a 12-year-old girl in his car in Darwen, Lancashire, and left her to die. Ibrahim, an Iraqi who had been refused asylum here, was driving while disqualified, and after Amy Houstonâ€™s death he committed a string of further offences.

However, an immigration tribunal ruled that because Ibrahim had children in Britain he had a right to a â€˜family lifeâ€™ in the UK.

Not a thought was given to the human rights of the family whose lives he had destroyed.

In a further shocking case, Rocky Gurung, a Nepalese who killed the son of a Gurkha war hero by throwing him into the Thames on a drunken night out, was permitted to stay here so his right to a â€˜family lifeâ€™ could be protected.

After prison, Gurung persuaded judges that it would breach his â€˜right to family lifeâ€™ if he was sent back to Nepal. This was despite the fact he was single and had no children.

Last year, a total of 200 foreign prisoners avoided deportation by claiming their human right to a â€˜family lifeâ€™ in Britain. The Home Office has confirmed that the â€˜right to a family lifeâ€™ is now the most popular claim used by criminals who successfully avoid deportation from the UK â€“ overtaking the right to â€˜protection from tortureâ€™ which they might face when returning home.

If faith in our legal and immigration systems are not to be fatally undermined, this has to stop. Britain must regain control of its own destiny in the same way that Australia does.

The fact that we are shackled to the European Convention on Human Rights of course makes this harder.

But the truth is that this is entirely possible. Under the Convention, unlike the rights to protection from torture or inhumane treatment, the right to a family life is not absolute.

It states that there can be no interference with the right to a family life â€˜except as is in accordance with the law and is necessary in a democratic society in the interests of national security [or] public safetyâ€¦ for the prevention of disorder or crimeâ€™.

It is only Strasbourgâ€™s judges and our own courts which slavishly follow their rulings who let foreign criminals claim the right to a â€˜family lifeâ€™ to stop being deported from Britain.

The question now is whether David Cameron, who promised to take the toughest possible line against foreign criminals, will take a stand against this judicial activism.

As Tory MP Dominic Raab says, it is one thing to argue against deporting an individual to a state which permits the use of torture but it makes a mockery of British justice to let hundreds of criminals and suspected terrorists claim a human right of family ties to avoid deportation.

â€˜This is merely a novel expansion of human rights by the UK courts and Europe,â€™ Mr Raab argues. â€˜It is time they were put in their place.â€™

MPs could easily initiate legislation in the British Parliament to remove the contentious â€˜right to a family lifeâ€™ protection.

Inevitably, any new law would be challenged in Strasbourg where unelected judges would undoubtedly find against Britain.

But then what? Because the judges do not have the power to enforce their judgments (in a deliberate move to protect member states from abuse of power by Strasbourg, they can only huff and puff against countries who defy their rulings).

Admittedly, the Council of Europe could threaten to revoke the UKâ€™s membership but it has consistently failed to expel Russia and Turkey who have been guilty of most flagrant abuses of human rights law.

So it is inconceivable that Britain would be sanctioned for deporting killers and rapists to their original countries â€“ even if it does mean leaving behind a â€˜family lifeâ€™ in Britain.

The same is true of Europeâ€™s ruling that UK prisoners should be entitled to vote â€“ a judgment in clear defiance of the wishes of our own democratically-elected Parliament.

Indeed, there are currently 8,600 rulings by Strasbourg which have been defied by European countries.

Mr Cameron, whose government is now responsible for looking after British-born gunman Clifford Tucker following his expulsion from Australia after 40 years and making sure he does not harm the British public, must say that enough is enough.

We have plenty of nasty foreign-born criminals like Tucker living here. It is high time they were placed on a plane home, whatever the judiciary may say. Failure to do so will mean Britain remains a safe haven for the worldâ€™s worst criminals.

This would pay the wages of 13,658 police constables. How would you prefer your hard earned and paid taxes to be spent?

To read the original article and comments click the link below.

Why 47 dangerous criminals on the run can't be named: Because of their human rights, of course!


Forty-seven dangerous fugitives cannot be named by officials â€“ because of their â€˜human rightsâ€™.
They include criminals convicted of child sex offences, murder and rape. All have breached the terms of their licence and should have been returned to prison.
They are assessed by officials as being at â€˜high or very high riskâ€™ of committing further criminal offences. But the Ministry of Justice has refused to name them.
Critics said the human rights of offenders were being put before those of ordinary members of the public.
Details of the scandal first emerged 18 months ago when officials revealed more than 1,000 criminals were at large despite having been recalled to custody. Among the total were some who have been on the loose for up to 25 years after police failed to track them down.
The most recent Ministry of Justice figures show 960 have not been found, including two rated as level four â€“ the highest risk to the public â€“ and 45 rated level three. The group of 47 includes two murderers, two paedophiles, a rapist and ten robbers. 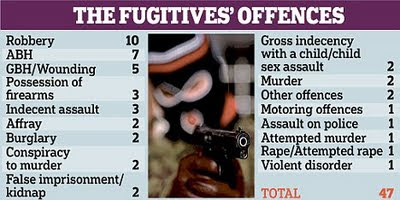 Police should find 75 per cent of recalled prisoners classified as â€˜emergencyâ€™ cases within 74 hours and three-quarters of standard recalls should be completed within six days.
Details of all offenders who had not been returned were compiled following the murder in London of two French students, Laurent Bonomo and Gabriel Ferez, in 2009 despite the killer being recalled to jail.
Dano Sonnex, who had been serving eight years for a stabbing and a number of knifepoint robberies, had been mistakenly freed under low supervision when documents revealing his true danger to the public had not been shared by officials.
Opportunities to return the 23-year-old to prison were then squandered or missed. When an arrest warrant was finally issued, it took police a further 16 days to get round to knocking on his door.
By that time, Mr Ferez and Mr Bonomo were dead, knifed to death by Sonnex earlier that day.
Tory MP Philip Davies said human rights should not be used as an excuse to hide the â€˜hugely embarrassingâ€™ revelations.
â€˜Itâ€™s absolute madness. Once again it appears to put the human rights of dangerous criminals ahead of the rights of law-abiding people to know who is at large.
'It must be in the public interest to put the names of these offenders in the public domain.â€™ Ministers have now ordered a review of the policy of releasing criminalsâ€™ details.
A Ministry of Justice spokesman said: â€˜This Government is committed to transparency and there should be a presumption that such information is published unless the police object for specific operational reasons. Recapturing high-risk offenders will always be a priority.
â€˜Over the past 10 years, in more than 99 per cent of cases where an offender has been recalled, the individual has successfully been returned to custody.â€™
Read more:
http://www.dailymail.co.uk/news/article-1378454/Officials-REFUSE-killers-child-sex-offenders-human-rights.html