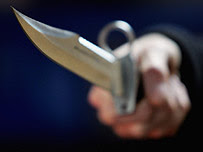 A police officer and a community support officer are in critical condition after being stabbed in Ealing, West London.

A Metropolitan Police spokesman said the Pc and the community support officer have been taken to hospital by ambulance. He said the support officer is believed to have suffered non-life threatening injuries but the Pc may be more seriously wounded.

The attack occurred in Ealing Broadway, on Uxbridge Road, at a bus stop. The incident took place opposite the Nationwide building society branch and outside The Parish Church of Christ the Saviour. A police source said that the attack may have occurred over a bus ticket dispute.

It is believed one officer was slashed across the throat. The suspected attacker was arrested after the attack and at least ten police cars have blocked the main street as officers search the scene.

A local witness said that police had stopped two young men to search them at approximately 3.45pm. One man allegedly fled from the scene but the other attacked the officers.

London mayor Boris Johnson said he was "shocked" by the attack. "Violence has no place on the streets of London," he said.

Our thoughts and best wishes go to the officers and their families. Get well soon.

Too many people are too quick to complain about the police, but this is what Officers face on a day to day basis and many of the those moaners wouldn't want to face this threat on a daily basis to protect the lives of others.

We can't help but wonder if Ken Clarke would be so keen to include these evil scum among the thousands he would set free under his "Prison Doesn't Work" nonsense.

Like hell it doesn't! Prison is the ONLY place for these low life.

Detectives are continuing to question a man over a knife attack on two police officers who were checking bus tickets in west London. A police constable suffered a slashed throat after he and a community support officer (PCSO) were attacked when they discovered a passenger was wanted for a recall to prison.

The attack happened at a bus stop in New Broadway, a busy shopping street in the centre of Ealing at about 3pm yesterday. The injured police officer, 23, underwent surgery last night and was today in a "serious but stable condition" in hospital with stab wounds to his neck.

The 27-year-old PCSO was treated in hospital and later released after suffering knife wounds to his head as he wrestled with the attacker. Colleagues of the injured officers, who are based in Ealing Borough, arrested a 30-year-old man at the scene. A knife was recovered. He was taken to a west London police station where he was being held in custody.

Detective Superintendent Andy Rowell, the Ealing Borough police commander, said the incident occurred when a man began "behaving suspiciously" after being approached by the PCSO. On being challenged he allegedly turned his knife on the PCSO and the officer who suffered "multiple stab wounds initially thought to be life threatening".

Eyewitnesses said the officers, who were wearing stab-proof vests, were part of an operation checking bus tickets. One officer said the suspect was stopped and when a radio check was made the pair learned he was wanted for recall to prison. The source added that when it became clear he was about to be arrested the man pulled out a knife and attacked the officers.

Another eyewitness said the suspected knifeman had been travelling on a 207 bendy bus which travels between Hayes and White City. The stabbings happened close to Christ Church School and a short distance from Ealing Town Hall in a street packed with shoppers.

The leader of Ealing Council, Julian Bell, said: "This is a truly shocking incident. I've lived in Ealing for 25 years and I've never known anything like this. Police officers do a fantastic job and put their lives on the line every day to keep our streets safe. Our thoughts are with the officers involved and their families. Council officers are already reviewing footage from all CCTV cameras in the area and will be giving police every possible assistance with their investigations into the incident."

Det Chief Supt Rowell praised officers and thanked people who went to their aid. He said: "Whilst this is no doubt a shocking incident, it is extremely rare for police officers to receive injuries of this nature whilst on duty."

A Conservative election pledge that anyone caught carrying a knife could expect a jail term will not be implemented, the BBC has been told. Justice Secretary Ken Clarke said he would put sentencing policy in the hands of judges, not newspaper pundits.

His comments came ahead of a Green Paper aimed at reducing jail numbers in England and Wales through changes to sentencing policy and rehabilitation. Asked by BBC political editor Nick Robinson whether people caught carrying knives could expect a lesser punishment, Mr Clarke said ministers would not insist on "absolute tariffs".

It means that, as at present, someone caught carrying a knife may not face a custodial sentence, and may be cautioned instead.

In the Conservative election manifesto, the party said four out of five people convicted of a knife crime did not go to prison and they would send a "serious, unambiguous message that carrying a knife is totally unacceptable".

The document said: "We will make it clear that anyone convicted of a knife crime can expect to face a prison sentence." Mr Clarke was asked whether people convicted of carrying a knife could get a caution or community service.

He told the BBC: "We're not setting out absolute tariffs for particular things. What happens is pundits or newspapers suggest levels for particular forms of crimes ... Parliament in its wisdom enacts them - it doesn't work. Anybody who is guilty of serious knife crime will go to prison but I'm not in favour of absolute rules. I'm in favour of actually allowing judges to see how nasty the offender is, see what the offence was, see what the best way of protecting the public from him is."

"I'm more interested in actually, will we stop this man doing this again in future?" One thing is for certain, letting him out early won't prevent him re-offending.

Nearly 1,000 criminals, including murderers, paedophiles and rapists, are at large despite having been recalled to custody. Ministry of Justice figures show 914 criminals are on the run even though they have committed new crimes or breached the terms of their release. The total includes 22 recalled between 1984 and 1999. Those wrongly on the streets include 18 murderers, five paedophiles and 17 convicted of carrying guns.

Police should find 75 per cent of recalled prisoners classified as high risk â€˜emergencyâ€™ cases within 74 hours and three quarters of standard recalls should be completed within six days. But since 2007 nearly 10,000 criminals were not back in jail within the target time.

Ken Clarke has said he wants to drive down inmate numbers through a "rehabilitation revolution" to reduce the numbers of people who re-offend after leaving prison. The Green Paper sets out plans that those who plead guilty immediately will receive discounted sentences and that there will be fewer indeterminate sentences - where there is no fixed release date.

Last year about 4,600 people were admitted to hospital in England with knife wounds. In the 12 months to June 2010, there were 29,981 knife crimes in England and Wales recorded by the police.

In July 2008 David Cameron said a "presumption to prosecute" did not send a strong enough signal and there should be a "presumption to prison" for knife crime. He said: "This is about kitchen knives stuffed down the front of tracksuits... We're talking about mainly young people carrying knives as part of a culture. That culture has to stop."

The Home Secretary, Theresa May's recent comments have exposed a Cabinet split over Ken Clarke's sentence reviews and prison reforms. She insisted â€˜prison worksâ€™ as Tory anger deepened over Clarkeâ€™s attempts to liberalise the justice system. Her remarks lifted the lid on a damaging Cabinet rift over Justice Secretary Mr Clarkeâ€™s review of sentences and prison reforms, which Right-wing Conservatives say are too soft and risk a public backlash.

The Home Secretary deliberately echoed the mantra of predecessor Michael Howard, who put himself at the head of a simmering rebellion against Mr Clarkeâ€™s plans for law and order.

Mrs May told a Home Affairs Select Committee: â€˜We must all recognise that in looking at the wider issue of sentencing, prison works but it must be made to work better.â€™

Her comments contrast with those of Mr Clarke, who has described the â€˜warehouseingâ€™ of tens of thousands of prisoners every year as â€˜ineffectualâ€™. He proposes a Â¬â€˜rehabilitation revolutionâ€™ with thousands of offenders to be handed tough community punishments.

Lord Howard said this focus was â€˜fatally flawed ... like solving only one side of a Rubikâ€™s Cubeâ€™. Now he has seen the document, Lord Howard, the architect of the Tory â€˜prison worksâ€™ policy in the 1990s, has decided to go on the offensive over the â€˜flawed ideologyâ€™.

He said Mr Clarkeâ€™s Green Paper makes only â€˜a couple of cursory nodsâ€™ to the idea that a prison sentence â€˜protects the public and provides peace of mindâ€™. Lord Howard attacked Mr Clarkeâ€™s Â¬â€˜persistent denial that the rise in the prison population that has taken place since 1993 has anything to do with the near-halving in crime that has taken place over the same periodâ€™.

His intervention will be seen as a green light to rebel by many Right-wing Tories who have previously remained loyal to the Coalition. Lord Justice Leveson, chairman of the Sentencing Council, which sets guidelines for judges, also questioned the plans, saying there was no clear evidence that community punishments were more effective than prison at rehabilitating offenders.

The sentencing Green Paper will see more than 6,000 fewer prison places available in England and Wales by 2014 than had been planned.

We can only hope one place is reserved for the mindless scum who would not have been able to commit these attrocious acts if he was where he deserved to be, locked up in prison.

Are you listening Mr Clarke?