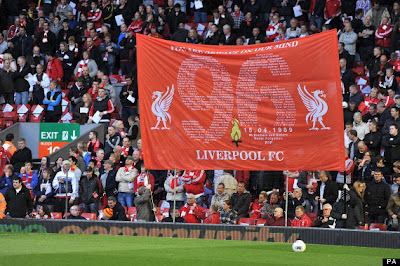 The Hillsborough tragedy might be one best left off topic for many but I will say my piece regarding the Bishop of Liverpool's report.

What I do not accept is the key finding of the report that Liverpool fans were not the cause of the disaster. The quest for the truth regarding this incident has now reached Orwellian proportions. It now appears there were no drunken fans: no ticket less fans and the fans have no responsibility for using so much force to push their way into the ground that nearly 100 people were crushed to death.

A society where individuals have no responsibility for their actions and where authorities are now routinely blamed for failing to prevent or manage those actions is a very unhealthy society.