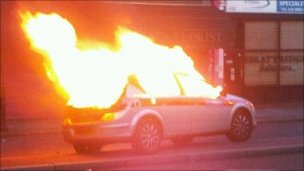 When an alleged gun toting gangster, who tried to murder a police officer, is shot dead you might be forgiven for thinking that a decent law abiding community would support the action taken or at least await the outcome of the investigation. Apparently decent law abiding community does not apply to some of the residents of Tottenham and the usual hangers on who use any such incident as an opportunity to vilify the police.

Tonight about 120 people marched on Tottenham Police Station demanding justice. The dead man, Mark Duggan, was described as 'into things' but apparently he would never harm anyone, ergo he must have been murdered by the police. So a bunch of criminal thugs decide to set light to some police cars and run riot.

When someone dared to highlight the fact that gun crime, stabbings and robberies are disproportionately committed by black offenders this was decried as low level racism by Diane Abbott MP. The same Diane Abbott who sent her son to private school as she was worried that he would be indoctrinated into gang culture if he went to her local state school.

White offenders are also involved in all these types of offences but in general the community does not support them and the press, MP's, community leaders et al line up to publicly show that they are anti crime and want to be seen to be tough on crime. The imbalance in offending rates and the future of many young black people is not going to change until the community start speaking out instead of spouting the usual racist diatribe. I am delighted to see that Diane Abbott has at last acknowledged the problem. When is someone going to have the balls to actually speak out against it?