Away with the Faries! 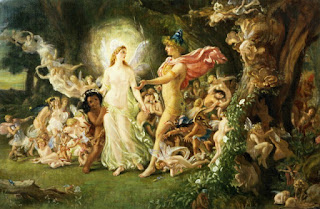 I was hobnobbing with some of the Force hierarchy recently. For the record there wasn't an apron or set of antlers in sight. Drink was flowing and one of the ACC's made a few indiscreet comments regarding the other ACPO team. Don't trust the DCC he said. I don't. What he says to officers and what he says and does in the corridors of power are two different things. He also said that the Chief Constable was a very clever academic but 'away with the faries' when it came to the practicalities of providing an effective police Force. An interesting perspective on the senior management team.

So, how is Oberon (King of the Fairies, geddit!) proposing to deal with the CSR. There seems to be relief that we are only going to take a 20% cut in funding rather than 25%. Oberon has sent a letter to all senior managers in the force setting out his vision as to how this money is going to be saved. He is adamant that front line officer numbers will be preserved. This would be good but we have experience of how the figures can be manipulated and front line officers may be redefined if necessary. This is what he proposes. Worth noting as it will come your way too:

1. Less bureaucracy in crime recording. (This means that the police staff that record crime reports over the phone and the police staff and officers that allocate crimes for investigation will be merged and centralised.)

2. A changing culture of value for money. We have got to learn to do even more with less. (Sounds great, but what does it mean? The pot has been squeezed for years. With regard to officers, there is little if anything left.)

3. Further cuts in leadership numbers, administrative support and support services. (This is good but is unlikely to go far enough. The Force has almost trebled its police staff over the last ten years. Senior police staff have been allowed to build empires and grow their salaries and importance to ridiculous levels. To date we have seen nowhere near enough culling of these parasites who cause officers more work than they save. I have previously questioned the value of PCSO's. There are some very good ones, but the majority really deliver very little.)

4. Changes to the pay and rewards for both officers and staff. (This clearly means that the Government pay review has already decided that the rewards that officers receive for short notice shift changes, Bank Holidays and Rest Days will be changed. We may even see salaries for all officers with little or no reward for working extra hours, Bank Holidays and shift changes. This could be a disaster as officers will become unavailable when needed. There will be little incentive for managers to plan ahead and as officers are disrupted more and more for no reward, morale and productivity will fall.)

5. More collaboration with partners and other Forces. (Force collaboration and mergers are inevitable as budgets are cut. Will this provide a more effective service for less or just larger, faceless, depersonalised organisations providing a very basic one. Partners also face cuts and will withdraw services leaving the police with the gaps to fill sorting out the social problems of society that will inevitably come our way. Increased unemployment, cuts in benefits and other fiscal measures will undoubtedly mean increased crime levels and demand. And don't forget the revolving door justice system will get worse as fewer offenders than ever go to prison.)

6. Reduction in Operational Support such as intelligence, crime and incident reports. ICT improvements. (Eight years ago we had seven intelligence units and now we have four. Clearly, this is going to be centralised and reduced to one or two teams. The problem with this is that, as we found with the reductions that have already taken place, local issues such as antisocial behaviour, that are important to residents are lost and the focus becomes the traditional police functions of car crime, drugs and burglary. This is where resources get directed and this will become worse with a centralised function.)

So five out of ten for Oberon. We shall see in due course how it all unfolds.

Does Nick Herbert fill you with confidence? Reforming offenders is absolutely necessary but how is that going to be achieved with 23% cuts in spending in his department?