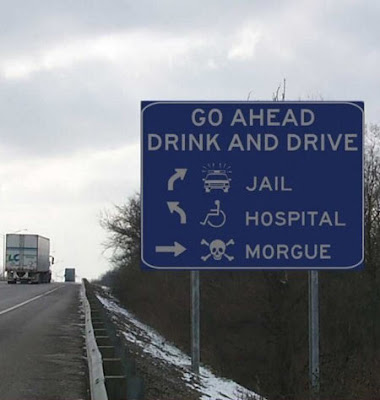 Like almost all police officers I have had to deliver death messages. Some stand out, particularly the young and unexpected ones. I remember calling round a ladies house on a Saturday afternoon. She answered the door with two young children running around excitedly as a policeman was on the doorstep. Her and her children's lives fell apart after I told them their husband/father was in the mortuary having just been wiped out by a drunk driver. There are others I recall, such as the parents of the 16 year old boy knocked off his bike and smashed to bits by a drunk driver who could barely stand up.

I haven't become the virtuous non drinking driver and I will have a couple of drinks when I go out but I absolutely support the recent report recommending that the drink drive limit is reduced from 80 micrograms of alcohol in 100 millilitres of blood to 50.

A few years ago now I worked in custody and had the opportunity to test myself on the drink drive machine. I could drink four pints of beer in about an hour and a half before I reached the limit. There is no way that I am safe to drive after four pints and I would have been a severe risk on the road. You lose between 7 and 13 micrograms of alcohol every hour. This means I could actually drink five pints in two hours and possibly pass the test.

Over the years I have stopped and breathalysed dozens of people. I know that many of them have had six or more pints over the course of an evening. Some of these people were blowing under the limit after an evening of six or seven pints. They could not believe they were getting away with it.
I have heard some of the wailing of people done for drink driving. They go to Court and swear they only had two pints and they thought they were OK to drive. Absolute lies and deceit, unless it was two pints of spirits.
Most countries now have a limit of 50 micrograms. We should reduce our limit as soon as possible. We probably should not drink and drive at all but I do not support a zero tolerance policy. A limit of 50 will still allow people to drive after a couple of pints. Some people won't like that but it is a damn site better than the current situation and more likely to become a reality.