A Man is Dead 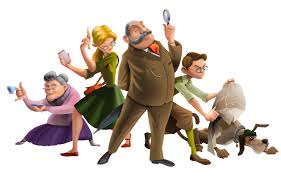 I was a real life murder squad detective once. Which was nice. I still have nightmares. Please read on, but be aware this is based on real life. This is the real deal. This is a rough draft from my forthcoming book. Sleep well.
A Man is Dead
If you are murdered you get a team of elite detectives on the case led by a Detective Chief Inspector who is known as the Senior Investigating Officer. SIOs are issued with half-moon glasses to peer over. They sit in dimly lit rooms late at night. It is a little known fact that SIOs are also responsible for feeding the electric meter, hence the low level of lighting like on the telly. Most prefer to spend the money on drink which they imbibe in their single bedsits where theyâ€™ve lived since their wives left them because they were married to the job.

I joined the Murder Squad as a Detective Constable. My first SIO was a rather large chap who looked like a Welsh farmer with trapped wind. His name was Mr Snugglepants. He once confided in me whilst in drink that he didnâ€™t have a clue what he was doing and should never have been promoted above the rank of Sergeant.
I recall attending a case conference at the Old Bailey chaired by a Queens Counsel who was prosecuting the murder case for us. She was a remarkable Barrister who grasped the smallest detail with ease. Our SIO, wearing his best pair of thick spectacles, seemed somewhat lost from the moment we sat down. For some reason, he kept his suit jacket fully buttoned up, making him red faced with a glaze of sweat across his brow. Every point the QC made was met with a shouted, â€˜I concurâ€™ from our leader. I donâ€™t recall him saying anything else, even when the barrister asked him if he was OK as heâ€™d started to go cross eyed and started swaying. He retired a few weeks later. To his credit, he was the only one of his generation that I met who expressed any regret about the miners strike. No wonder he should never have been promoted.
He was replaced by one of the Detective Inspectors who was promoted to DCI. His name was Mr Scrooge. Iâ€™d been plaguing this officer with rude e-mails for several weeks. I had yet to learn the valuable lesson that to leave any computer unlocked in a police building will automatically lead to other officers sending e-mails to management on your behalf. The new SIO was of a different stock. He was comfortable in his rank, and slipped easily into the stock brown raincoat. I learned a lot from this SIO and his new DI, even when I accused them both of being senior Masons in the pub one evening. My new SIO had a rather fetching way of showing he was losing interest in you. Firstly his face would start to twitch and heâ€™d start focusing on your forehead. If you failed to stop talking, heâ€™d grab his penis and give it a good tug. His first appearance on Crimewatch saw us all glued to our TV sets as youâ€™d imagine. Sadly, he appeared to have invested in some tighter pants which stopped the old chap needing to be adjusted so often.
The SIO would direct the investigation. Or he would go to see a uniformed Superintendent, be rude enough to get suspended, then go renegade and start chasing a suspect through an abandoned warehouse on his own. I never personally knew of this happening in real life, but Iâ€™m sure it has. Even though if anyone acted like that theyâ€™d more than likely end up getting sacked for ruining a perfectly good murder investigation.
One of the Detective Inspectors would have day to day control of the investigation. If the case was more simple, the DI could call themselves the SIO which was a really nice treat for them. It was made quite clear by the real SIO that it was just for that case though, and not to get too big for their boots.
Murder Squad DIs fall into several camps. Some pretend to be mavericks, and do outlandish things to demonstrate that they are unbalanced. They will boast of previous indiscretions, and tell tedious tales of their time on the Flying Squad. They will have had several failed marriages, and will sometimes get into punch ups in the office. Others think they are one of the lads, and lead all the arrest enquiries. They model themselves on DI Burnside from The Bill. Interview rooms in police stations are eschewed, as the DI tends to prefer to interview in the back of cars with his hands around the suspectâ€™s neck. They will sleep under their desks and scare the shit out of the cleaners each morning. The third DI will never have been seen by anyone on the team. It is likely they were left behind in the last office move.
Under the DIs sit Detective Sergeants with a team of Detective Constables. My DS was very angry. All the time. But I think he liked me, even when I mistakenly said his girlfriend looked like a man. Nobody was allowed to interview murder suspects other than the senior detectives. The lead interviewer on my first murder team had spent thirty years in the police preparing to become a black cab driver on retirement. He sustained his large girth by fried breakfasts and nightly adjournments to the local hostelry. His interviewing techniques were legendary however, and were spoken of in hushed tones.
One day, more through lack of alternatives than choice, I was offered the opportunity to sit in on one of his interviews. The suspect had been arrested on suspicion of kicking someone to death in an unprovoked attack outside a pub. I made the preliminary introductions for the tape, as the lead interviewer prepared himself. I then watched in awe as he started his interrogation. This saw him say, â€˜You did it didnâ€™t you?â€™ to the suspect about fifteen times before calling him a liar, switching of the tape then leaving the room. A masterclass.
Follow @WearyDetective
Tweets by World Weary Detective