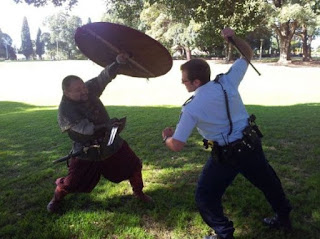 I trained to become a police officer. We were taken to a secret location and made to wear big pointy hats and flares. We were each given an en-suite room. In the old sense. Nowadays it would be described as a sink. Most of my class were on the same floor, so we would shower together and iron each others trousers. We also leaned to ball our boots, an expression which still makes me chuckle in a schoolboy fashion.