Sometimes when Stick Child and his friends are out playing, they see an old man walking his dog. They call this man â€˜The Weather Manâ€™, because he always asks the stick children to help him predict the weather. He asks the children to pick a pebble from the nearby stream, then he looks at it carefully, before declaring whether tomorrowâ€™s weather will be sunny or rainy, hot or cold, windy or calm. 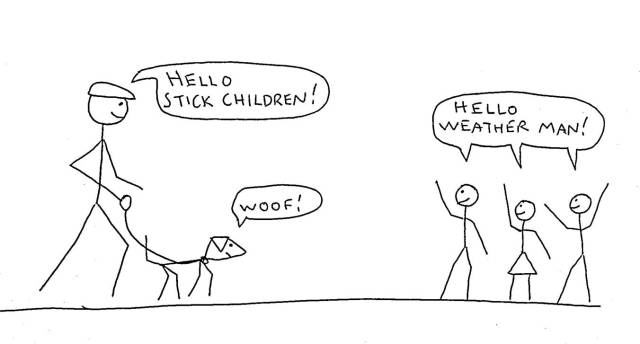 The stick children like the old man, but think his weather forecasting antics are rather odd and amusing, because heâ€™s not usually right. He thinks that if the pebble is larger or smaller, a different colour or a different shape than the one yesterday, this enables him to predict what tomorrowâ€™s weather will be like. Often they see him walking his dog in his T-shirt and Bermuda shorts in torrential rain, or sweltering in a thick duffle coat on a scorching hot day because he got it wrong again.

One day, the stick children asked the old man why he thought he could predict the weather by comparing pebbles and he told them it was because heâ€™d always done it that way. He also said that it must be a good indicator of forthcoming weather patterns because sometimes his predictions had actually been correct.

The stick children felt a bit sorry for him because he believed in what he was doing, but they all knew that his method was no good. Then one of them had an idea â€“ her Mummy had just bought a new television and she didnâ€™t know what to do with the old one. The stick children had a meeting (not like the ones grown-ups have, which go on for several hours) and after two minutes they decided to ask the old man if he wanted the old television, so he could watch real weather forecasts.

Next time they saw the old man, they told him about their plan and he was really excited, because heâ€™d never owned a television before. That afternoon, the stick children (and a stick parent) took the television round to his house and set it up. They showed him how to find the weather forecast and explained how weather experts like Stick Lucy the Weather Lady use real science for predicting what the weather will be like.

The old man was very impressed and thanked the stick children for their thoughtfulness. Now he knows there is a better way to understand and forecast the weather than by trying to use pebbles from the stream, which means he no longer gets caught in downpours in his Bermuda shorts. After realising this, he couldn’t believe anyone would ever try and use pebbles at all.

Stick Childâ€™s Thought of the Day

For anyone who knows Stick Child, youâ€™ll probably have already figured out that the weather analogy is all about understanding measures properly. The stones represent binary comparisons (i.e. a completely useless â€˜methodâ€™ prone to giving wrong signals) whilst the proper weather forecast reflects the use of control charts and associated scientific methods for understanding data properly.Â Better methods of understanding data lead to better choices – what’s not to like?

Bear in mind that neither control charts nor television weather reports are always 100% accurate, but they use real science, so theyâ€™re a whole lot better than pulling pebbles out of a stream.

If the old man was prepared to change his method to something that actually works, so can you.