A Tale of Two Kings

At bedtime, Stick Child’s Daddy often reads his sonÂ a story from his favourite story book, “Medieval Stories from Stick Kingdom with an Inevitable Systems Thinking Moral”. One recent story they particularly enjoyed was called “A Tale of Two Kings”, which went a bit like this…

Once upon a time, many years ago, the King of Stick Kingdom decided to commission artwork to decorate his palace, so he secured the services of the greatest artist in the land – Stick Artist. He asked Stick Artist to paint him the most wonderful painting she could imagine. Stick Artist was up for the challenge and immediately fetched out her canvas, easel, brushes and paints.

But then…just as Stick Artist was about to begin her masterpiece, Stick King said, “Oh, can you make sure you put some rhinos in the picture? I like rhinos”. Stick Artist said, “No problem, Stick King”, and began to paint.

Then Stick King stopped her again and said, “Oh, by the way, I really like the colour purple, so would you make sure there’s lots of purple in the picture?” “Okay, Stick King”, said Stick Artist.

After a few minutes, Stick King announced, “Oh, and I’d like the picture to be circular”. Stick Artist sighed quietly, doffed her beret, then began to cut her canvass into a circle.

This went on – spaceships, explosions, dinosaurs, zig-zags, mountains, more purple, hold the brush with your left hand, a little pink, some clouds, every third brush stroke to be 93.7 degrees adjacent to the previous one, and bananas. Stick Artist did as she was told, despite her mounting frustration (as she was the greatest artist in the land), until finally the picture was ready.

“Aggghhh – it’s an abomination!!” yelled the Stick King as the incoherent travesty of a painting was unveiled. “It’s a crime against art!” he raged.

Stick Artist took the hint and ran away very quickly before she could be imprisoned. She thought it was a bit rich that the Stick King had blamed her for the mess that ensued after being so prescriptive with his daft ideas, especially as he wasn’t an artist himself.

Anyway,Â Stick ArtistÂ escaped to a neighbouringÂ land, where the Stick Emperor soon heard of her reputation and commissioned her to paint him a painting for his palace. Stick Artist accepted the task, listened toÂ Stick Emperor’s general ideas about what heÂ wanted, then produced the greatest piece of art ever known in Stick Land. 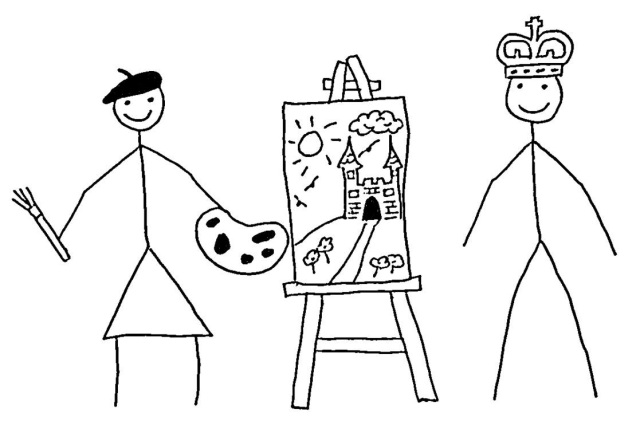 This merrie tayle goes to show that you get better results out of people who know their craft if you give them broad direction, rather than interfere and micromanage what they do. If onlyÂ Stick King had been able to visit the future when this was more widely known.

Concepts like ‘Commander’s Intent’ (where a clear aim is communicated by a military leader, whilst affording flexibility and autonomy to subordinates to develop their own tactics) were unknown in medieval Stick Kingdoms.Â Notions such as workers being intrinsically motivated by a sense of autonomy, mastery and purposeÂ were also unheard of by Stick Kings hundreds of years ago.

The good news for us today is that this stuff is known.