Iâ€™ve written about this before.

But it keeps happening.

And at what point are we going to accept that current approaches to tackling Knife Crime in England & Wales just arenâ€™t working?

How many more young lives is it going to take?

In 2007, I stood at the scene of the murder of Kodjo Yenga and listened as his family and loved ones wailed and sang hymns. Kodjo was 16 years old when he was hunted down in the street and stabbed to death by a group of teenagers. Some of the suspects were just 13 years of age. Not young adults. Children.

In 2008, I stood with the packed congregation at the funeral of Ben Kinsella. He was 16 years old when he was stabbed to death by three other teenagers.

In 2011, I stood at the scene of the murder of Milad Golmakani – a childrenâ€™s playground in North London. Milad was 22 years old when he was stabbed to death by a group of four teenagers. His 17 year old companion survived the brutal attack.

In 2012, I stood at the scene of the murder of Dogan Ismael. He was 17 years old when he was stabbed to death. The person wielding the knife was just 16.

The stories of these four are seared into my soul. And there are endless others like them. Police officers continue to find themselves standing in far too many of the haunted places where young men have lost their lives.

It is, unquestionably, one of the most urgent issues of our time.

If they were children of the establishment â€“ of those with power and influence, wealth and a voice â€“ it would be a national scandal. Because they are mostly poor, frequently black and invariably from challenging inner city neighbourhoods, itâ€™s tempting to feel that much of the watching world simply doesnâ€™t give a damn.

How many more shattered families is it going to take?

As a police officer, a Londoner and a dad, I canâ€™t think of many other things that need to matter more. And I know that an overwhelming number of my colleagues feel the same.

They are out there every day – answering emergency calls, pursuing armed suspects, recovering knives, bandaging wounds, stemming the flow of blood, comforting bewildered and broken relatives. And they are doing a damn fine job.

But we arenâ€™t even going to begin to fix the situation on our own.

Of course, we will always be first in line when it comes to dealing with the curse of knife crime.

And that is absolutely as it should be. There is no greater duty â€“ or privilege â€“ for a police officer than to save the life of another.

Acceptance of that fact leads inevitably to the often controversial subject of Stop & Search.

And the reality is very straightforward: Stop & Search saves lives.

We need to give up on the counter-productive – and sometimes deliberately mischievous – conversations that demand the police do less Stop & Search whilst, simultaneously, telling us that we have to do more to prevent children murdering one another.

My operational experience in a number of different parts of London has taught me that there is an absolute connection between levels of Stop & Search and levels of Knife Crime. Where we use our powers professionally and responsibly, we make places safer.

Itâ€™s a simple as that.

But we have also got to acknowledge that police enforcement activity alone is no more than a sticking plaster on a problem characterised by endless complexity.

We need to accept that Stop & Search is not the long-term answer to Knife Crime. It will save lives, but it isnâ€™t the answer.

NorÂ are longer prison sentences the answer. I have no problem with sending a message about the very serious consequences of carrying and using a knife – and some young people are so dangerous that there is no option but to lock them up – but thatâ€™s not the same as solving the problem.

Search Arches in secondary school playgrounds are not the answer.

Hand-held metal detectors in railway station ticket halls are not the answer.

In this relentlessly impatient world of ours, we have got to pause for more than a moment or two to understand what it is that weâ€™re actually dealing with – to understand why the hell a young man would pick up a knife in the first place, never mind decide to use it. 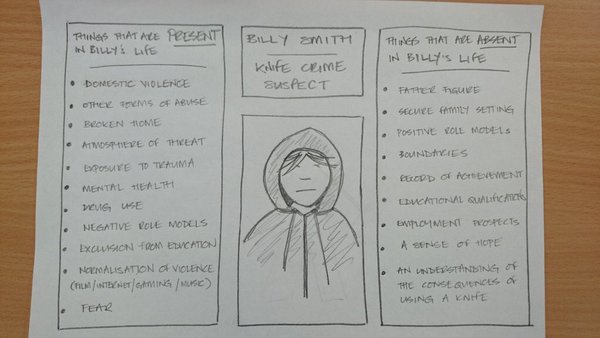 Billy is typical of so many of the Knife Crime suspects I have encountered down the years.

His life is all over the place.

He almost certainly grew up in a home where domestic violence was a daily reality and his early years were marked by the repeated exposure to extreme trauma. That one fact alone has astoundingly damaging consequences.

When you factor in a combination of other potential influences – absent dads, toxic role models, drug use, mental ill health, exclusion from education, limited job prospects and simple poverty – you begin to catch a glimpse of the potential roots of his propensity for violence.

Stopping him in the street and searching him for weapons may well prevent the unthinkable, but it wonâ€™t come close to addressing what lies beneath.

And then you need to look at the wider societal context in which Billy is growing up – a broken world characterised by the normalisation of violence and the relentless sexualisation of childhood.

In the absence of any consistent form of positive, nurturing adult involvement in his life, where is Billy taking his influence from?

Inevitably from the endlessly and astonishingly violent video games and films that flood our screens – together with the misogynistic and abusive music and stunningly graphic internet feeds that accompany them. Combined with the desensitising effects of real horror played on 24 hour news loops, is it any surprise that vulnerable young men think very little of resorting to the use of weapons?

We should never seek to excuse Billyâ€™s behaviour. But we have an absolute responsibility to try to understand it. And, until we do, we wonâ€™t even begin to address the disease of knife crime.

In the meantime, there are some people out there who do know and understand Billy – and who give me cause for stubborn hope:

We need to listen to these people. We need to learn from their experience. And then we need to do what we know works, even if it takes a lifetime to achieve.

Enough of us need to care enough for long enough for anything to change.

The alternative is unthinkable.

Police Foundation Report: An Initial Response
An Impossible Job
Her Name was Sarah
Institutional Humanity & Heroism
A Blueprint for Policing (2021)