And the multitude of challenges facing the police service in Britain are, it seems to me, greater than at any point since the end of the Second World War.

There are the crime challenges:

And itâ€™s not just crime:

Given the fact that everything canâ€™t be a priority, there are any number of exceptionally difficult decisions to be made – not least in terms of the people, resources and money we invest in:

We want to do it all. But the fact is that weâ€™re not going to be able to. Which means that there are some very tough questions to be asked.

What are we going to do differently?

What are we going to do less of?

What are we going to have to stop doing altogether?

The easiest thing in the world is to recline in the comfort of an armchair and point out what policing is doing wrong â€“ and what policing should be doing more of. But dealing with the reality and endless complexity of those challenges is a different proposition altogether.

For example we cannot, simultaneously, put more time, effort and resources into every emerging priority. There will have to be some give and take. If we want more of something, there will have to be less of something else. And we need to understand that, when it comes to making those decisions, there will be inevitable differences of opinion about what those â€˜somethingsâ€™ should be.

Itâ€™s a whole lot easier to talk about policingÂ than it is to be a police officer.

The organisational challenges facing the service as a whole at the start of 2017 are eye-watering:

In addition to the issue of morale, individual officers and staff face a number of personal challenges:

Having joined the Met in 1992, Iâ€™ve been a proud police officer for almost a quarter of a century â€“ and I believe that this is as challenging as I have ever known it.

But I also believe in the people I work alongside. I believe in:

These are the things that havenâ€™t changed. And these are the people who remain the everyday heroes and heroines who police our streets.

More so now than ever before, we need to make damn sure that weâ€™re not taking them for granted.

I donâ€™t have all the answers to the challenges of this new year, but I know that anyÂ responseÂ has toÂ beginÂ with theÂ care and regard we displayÂ for the men and women who stand on the thin blue line. 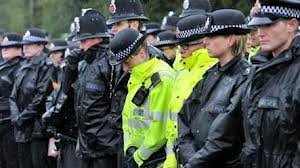 Police Foundation Report: An Initial Response
An Impossible Job
Her Name was Sarah
Institutional Humanity & Heroism
A Blueprint for Policing (2021)