Just over 11 years ago, in March 2007, I stood quietly on Hammersmith Grove in West London. I was dressed in full police uniform.

It was a beautiful spring morning and we had just closed the local roads to allow the friends and family of an innocent young boy to come and pay their respects at the scene of his killing. His name was Kodjo Yenga and, though I had never had the privilege of meeting him, I will never forget him.

I stood at a respectful distance and watched, as crowds began to gather at the place where the flowers were laid and the grief graffiti covered the walls and pavement. And I listened as the wailing and the hymn-singing began, cries of deepest despair and defiant hope filling the air. 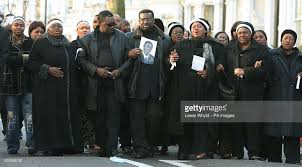 There are places and moments that you never forget.

In the years that followed, I found myself standing in far too many of the haunted places, where young men had lost their lives to unfathomable violence.

And still it goes on.

And I find that I cannot sit silently as the madness of history continues to repeat itself.

If we want anything to change, we need to understand what the hell is going on. And then we need to do whatever it takes.Â

This is about saving lives.

Policing will always be first in line when it comes to responding to gun and knife crime. And that is exactly as it should be.Â

But there are a range of current factors hampering the effectiveness of that response:

Policing will always be first in line.Â

The Cost of Austerity

But policing is only one small piece of the jigsaw – and we need to understand the complex consequences of austerity for a range of critical frontline public services:

Then there are the inevitable funding shortfalls for the vital charities and community organisations who do so much to plug the gaps that are growing all the time. And through which people are falling.

The costs of austerity are greatest for those least able to bear them.

The Normalisation of Violence

Violence has become normalised in society.

In fiction and in fact; on screens and in reality; on the news and in our streets; on a 24 hour rolling cycle.

And there is a very real danger of desensitisation – of a loss of innocence that, with terrifying speed, can become terminal in the lives and deaths of young men who know no other way.

The Failure to Take a Long-Term Approach

But far and away the most important factor is our complete failure as a society to take an effective long term approach to the violence disease.

Culturally and politically, we are in an endless hurry.

London needs a 20 year knife crime plan, but in this impatient world of hours, we demand 20 minute solutions. Anything longer than that and we begin to lose interest.

But violence is infinitely more complex than we want it to be. And if we are serious about doing anything about the situation now facing us, we need to look far deeper.

Let me introduce you to Billy Smith.

Billy is typical of so many of the Knife Crime suspects I have encountered down the years.

His life is a mess.

He grew up in a home where domestic violence was a daily reality – and his early years were marked by the repeated exposure to extreme trauma. That one fact alone has astoundingly damaging consequences.

When you factor in a combination of other potential influences â€“ absent dads, toxic role models, drug use, mental ill health, exclusion from education, limited job prospects and simple poverty â€“ you begin to catch a glimpse of the potential roots of his propensity for violence.

Stopping him in the street and searching him for weapons may well prevent the unthinkable, but it wonâ€™t come close to addressing what lies beneath.

I would never seek to excuse Billyâ€™s behaviour, but I do think we have a responsibility to try to understand it.

Otherwise, we will find ourselves back here again. Another round of hand-wringing and hopeless headlines. Another grief-stricken mother pleading for the madness to stop.

These are our streets; our neighbourhoods; our communities.

These are our children.

Choices. Or the Lack of Them.
Why We Joined
A Litany of Failure
Officer Down
The Stop & Search Debate