Today was one of those unexpected days.

I found myself on stage at the Cambridge Theatre – home of Matilda The Musical – talking to an audience of a thousand people about my new book. There were a number of writers there – including Sarfraz Manzoor, Rachel Clarke, Matthew Syed and Jess Phillips – and we were each given five minutes to say a few words.

This was my script…

I’m a husband to one, a dad to three and – for more than twenty-five years – I served in the Metropolitan Police. It was my duty and my joy.

When you strip away all that really isn’t important, the job of a police officer is just about as extraordinary as a job could ever be. It is:

The painful privilege of policing is to see all of life and all of death and everything in between: at the scenes of crimes and car crashes and every other kind of catastrophe. And it would be impossible to do it for any length of time and remain untouched – unaffected – by the things you see. I retired two years ago but, though I left the job, it never left me. There are faces and places I will carry with me for the rest of my days.

Three years ago, I told my story in a book called Blue – a memoir of crime and calamity, adventure and achievement, friendship and failure, serious illness and slow recovery. Now I’ve written a new one. It’s called Crossing the Line and it tells a bigger story – about policing and the singular, shattering perspective it offers on the world.

Blue and white cordon tape flicks in the breeze at the scene of the latest crime. It’s makeshift and insubstantial, but it establishes something solid and impermeable: a line that separates police officers from the rest of us. We might pause and stare for a moment, but we always move on in the end.

This new book asks us to stay a little longer – to cross the line and stand for a while in the places where police officers spend their working lives. I want us to see what they see – to understand how things really are in places so close and yet so far away, in the lives of those who might seem familiar but whose stories we do not know.

Crossing the Line tackles ten of the greatest challenges facing society – alcohol, drugs, domestic violence, knife crime, terrorism and more. It looks at them through a police officer’s eyes and asks:

Because it doesn’t have to be like this. We don’t have to resign ourselves to the endless repetition of the same grim headlines. But we are going to have to start doing things very differently.

Police officers can sometimes be portrayed as cynical, world-weary types, ground down by years of dealing with the worst that humanity has to offer. I don’t recognise that description. Though I have my scars, I still have my hope.

But hope is not a passive thing; it demands action. Enough talking. We need to get out there and do what needs to be done. There are lives to be saved; violent men to be confronted; slaves to be rescued; lost children to be found. 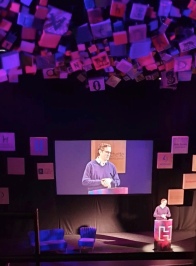